What is turbidity and how do you measure it ?

The meaning of turbidity in a liquid

The turbidity of a liquid is the degree to which small particles in the liquid scatter the light that runs through it, making the liquid almost opaque. Turbidity is being caused by small unresolved floating particles that are generally invisible to the naked eye. Therefore they use turbidity sensors to measure the right concentration.

In which process do I use a turbidity measurement?

Turbidity measurement is often used in the beverage, food and dairy industry as well as in the chemical and pharmaceutical industry, to monitor continuous process results or to indicate changes. The absorption measurement is probably the most widely used method of measuring turbidity. This is due to the large measurement range and the different types of immersion probes, probe tubes and rod probes. The most common applications with this technique are:

What happens when shining light through liquids? 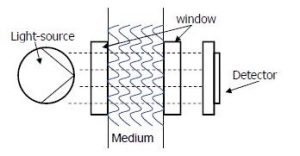 The law of Lambert-Beer describes the relation between the absorption and the transmission of light as follows: when a light beam with a particular intensity shines through an absorbing  material, the beam will have a lower intensity when leaving that material. A part of the light beam will be absorbed. The extinction depends on the absorbing particles in the material but also from the molar concentration from the absorbing particles and the thickness of the material. 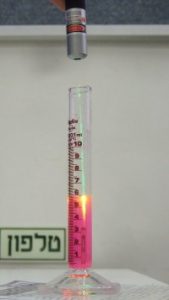 An example of Beer–Lambert law, a green laser lighting in a solution of Rhodamine 6B, the beam becomes weaker as it progresses inward 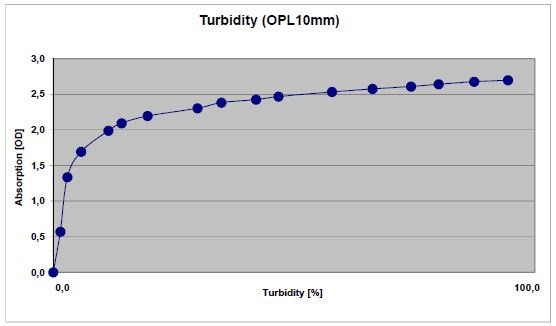 Conclusion: increases in turbidity of the medium inevitably increases the absorption!

For turbidity measurement, a formazin suspension is made by mixing solutions of hydrazine sulfate and hexamethylenetetramine with ultrapure water. The average particle size is 1,5 microns with a standard deviation of 0,6 microns. For the calibration of a turbidity sensor a formazin suspension of 1000EBC/TEF4000 is recommended. This relatively high concentration is characterized by improved storage capacity of up to 6 months.

How is turbidity measured 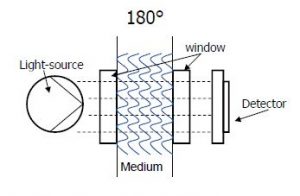 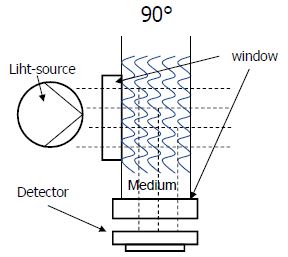 The reflection measurement: measures the intensity of the scattered light directly reflected from the medium. Here the transmitter and the receiver are in a line. The light must therefore be reflected by 180°. This method can only be applied with high turbidity from about 2000 NTU and in a restricted range of measurement. The measurement results can be expressed in NTU. 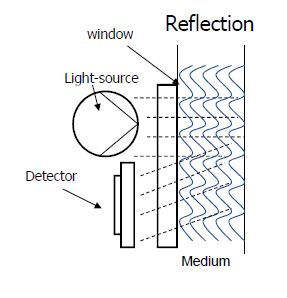 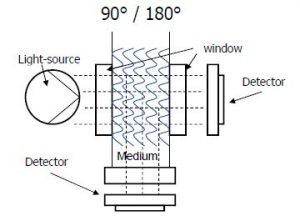 Would you like to speak to one of our engineers concerning this subject :